Nimble Streamer takes MPEG2-TS via UDP and HTTP to make outgoing media streams in various formats. UDP can be used as both unicast and multicast. Nimble supports multicast source IP according to RFC4607 SMM.
Playlists import is supported for multiple channels.
Enhanced interleaving compensation can be set up in case when your audio and video are unsynchronized.
Both LATM and ADTS AAC headers are supported.

Producing HLS and MPEG-DASH from MPEG2TS 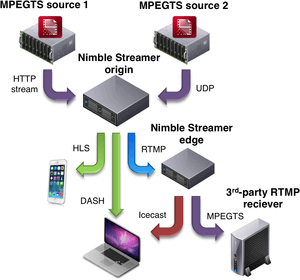 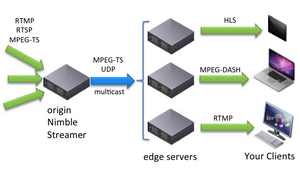 Nimble Streamer allows playing live streams via HTTP MPEG2TS.
You can set it up using this scenario along with other output protocols.
Also, thumbnails can be generated for output streams on-the-fly.

Nimble Streamer has DVR feature set which allows recording of any MPEG-TS live streams for further playback via HLS and MPEG-DASH.

Same transmuxing engine allows re-packaging MPEG-TS content from and into the following protocols.

Nimble Streamer supports WebRTC ingest via WHIP signaling with H.264, VP8 and VP9 video and Opus audio content.
MPEG-TS transport supports all these codecs so Nimble can generate MPEG-TS output with H.264/VP8/VP9/Opus without transcoding.
Read WebRTC setup instruction to try that in action.

Hot swap capabilities allow switching between source origin and substitute streams with no glitches or artifacts:

These features are available for MPEG-TS over HTTP once you enable instant inactivity disconnect for MPEGTS-based streams for your server instance.

Nimble has HEVC support for MPEG-TS as output. As a source, you can use RTSP, SRT, and MPEG-TS over UDP and TCP besides H.264.

Nimble Streamer can be installed in a couple of small steps and upgraded to the latest version by running two or three simple commands in console.

Let us know if you need any help and search through our documentation to find more information.

This website or its third-party tools use cookies, which are necessary to its functioning and required to achieve the purposes illustrated in the Privacy Policy. If you want to know more or withdraw your consent to all or some of the cookies, please refer to the Privacy Policy.
By closing this banner, scrolling this page, clicking a link or continuing to browse otherwise, you agree to the use of cookies.